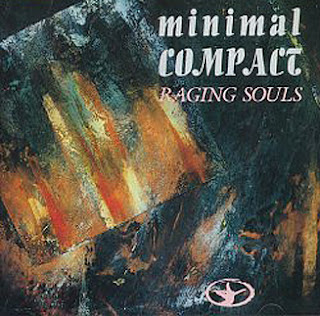 Minimal Compact from Tel Aviv, Israel were one of the little-known post-punk acts outside of the usual suspects. Formed in 1981 by vocalist Samy Birnbach, bassist Malka Spigel, and guitarist Berry Sakharof, Minimal Compact incorporated native Middle Eastern sounds into dark European rock, breaking ground that groups such as Blancmange and Savage Republic would eventually cross."Raging Souls" was released in 1985. Produced by Colin Newman, with artwork by Eno/Sylvian collaborator Russell Mills, it has proved their most popular album, with tracks like "My Will", "When I Go" (which was included in Wim Wenders' "Wings Of Desire" movie soundtrack), "The Traitor", "Autumn Leaves" all of which became live favorites. By this time Minimal had become established in Brussels and were at the hub of the local "International Indie Scene" which featured at various times, Tuxedomoon (both individually and collectively), Bel Canto, Colin Newman, Sonoko, Gilles Martin, Benjamin Lew. "Raging Souls" was their best one, their peak of inspiration. In this album you can clearly hear the amazing voice of Malka Spiegel (singer, bass), especially in a LOVELY brilliant (and quiet) song called "When I Go". It seems the album deals with the powerful emotions of the human nature. It's so good that it's painful for being a little bit short work.

Can you hear it?
Can you see it?
Can you look me in the eyes?
It doesn't really matter anymore...

Can you hear it?
Can you see it?
Can you look me in the eyes?
It doesn't really matter anymore...

Raging Souls is Minimal Compact at their peak. Unfortunately the follow-up The Figure One Cuts was inconsistent, though "New Clear Twist" was good; better still was the B-side "I Imagine" from their Immigrant Songs 12-inch EP of the same period. Yes, they did cover Led Zeppelin on the A-side, and a more idiosyncratic interpretation would be difficult to envision. The plural "songs" in the title of the release (as a whole) was deliberate and pointed, I imagine.

The band then drifted away from music, which never had been a stable source of income; it didn't help that they weren't allowed a visa to tour the United States (possibly the border authorities assumed they fled Israel to avoid compulsory military service, though this is speculative). However Malka Spiegel has continued a musical career, with Colin Newman (formerly of Wire), who she married.

Also there is a three-CD retrospective, Returning Wheel (named after the song on Raging Souls); it includes a best-of disc, a CD of remixes and a substantial collection of previously-unreleased material on disc 3. Great music & the liner notes are intriguing.

Among Minimal Compact's work I tend to favor the LPs Deadly Weapons and One By One. Deadly Weapons has been reissued as part of a series of '80s retrospectives by Crammed Discs. The latter LP was released on CD as One + One By One, including both the LP and the band's early singles, one of which "Statik Dancin'" was among their more requested songs in concert. OOP and difficult to find.

(Based on the commercial appeal of that danceable track perhaps, the CD replaces One By One LP's cover art, employing instead a photo from one of those singles. A disappointment, as the LP's somber cover painting had been a superb evocation of the sounds contained within.)

both berry Saharof & Rami Fortis are having a very successful music career in Israel. sami birenbach also had his good days as dj morpheus.