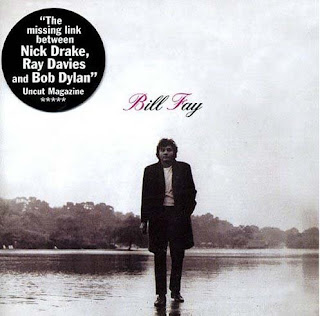 UK born singer-songwriter Bill Fay, has lived a life in musical wilderness until of late, a revival of his magical songs being long overdue. With artists such as Jim O'Rourke, Wilco and Julian Cope shouting their claims as to Fay being the lost great songwriter, one just has to take heed and see just what all the fuss is about. Usually when you get artists coming out of the woodwork, and stating that so-and-so was/is the greatest thing since sliced bread, I'm always well dubious. This time it seems, the hype is indeed warranted. Fay's debut album was originally released in 1970, and on the cover of this 2005 remastered re-issue we get the quote: "the missing link between Nick Drake, Ray Davies and Bob Dylan". I really couldn't have put it better myself. I would also add to that list the names such diverse characters as Syd Barrett and Scott Walker, who both in equal measures, cast a shroud over this album like some ghostly presence is at hand. With an almost deadpan vocal delivery, and set to a lush orchestrated backdrop, Fay's vision is immense in its outlook. Some of the tracks here, albeit without the orchestrations, wouldn't have looked out of place on Dylan's John Wesley Harding or New Morning. The gentle song one of the album's highlights "The Sun Is Bored" is the one of the most mournful and idiosyncratic.


The Sun Is Bored

And the sun goes down
Never to rise again