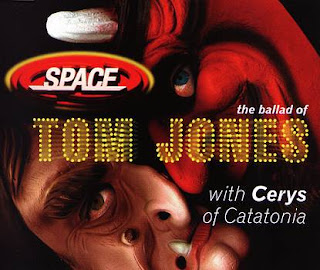 Stealing from the campy styles of Echo & the Bunnymen and the infectious sounds of the Boo Radleys, Liverpool's Space wasn't going to become just another U.K. band to burst onto the "alternative" scene in the early '90s. Tommy Scott (vocals/bass), Jamie Murphy (guitar), and Andy Kowalski (drums) formed in 1993 and aimed for a Who-influenced sound. A deal with Gut Records saw the release on the unnoticed Me and You Versus the World in 1996, but it was the kitschy single "Female of the Species" (1997) that made Space indie rock darlings. Before the release of Tin Planet, lead vocalist Tommy Scott made reference to the album as being one of the finest pop records ever made. Preceded by the powerful single "Avenging Angels," the expectations were set high. What actually was delivered, however, is more of the same with a slight twist. Tin Planet is not very different from Spiders, apart from the fact that some of the more Bacharachian influences seem to have succumbed to disco. The album includes several standout tracks, including the duet in "The Ballad of Tom Jones" with Cerys Matthews of Catatonia.
A fun and original tongue in-cheek hit about a homicidal couple saved by the singing of Tom Jones. Cerys was the obvious choice for guest vocals and handles the tune with relish.One of the finest songs ever written especially of that post Britpop era.

The Ballad of Tom Jones

What did I do wrong
Oh, you nearly drove me cuckoo
Am I really all that bad
You're worse than Hannibal Lector, Charlie Manson, Freddie Kruger

Why are we still together
Oh, I can’t leave you till you’re dead
You mean till death do us part
I mean like cyanide, strangulation or an axe through your head

I’ve phoned the marriage guidance
I tied the phone line round your neck
I’m sick of all this hatred
Oh, that’ll be the arsenic making you sick

Oh, I used to call you Satan
And you were Cruella De Ville
But now you call me your Delilah
And now I’m not your Lucifer
I am just your pussy cat

But just a word of warning now
Just in case we ever get tired of his voice
I know the Mafia, Godzilla, King Kong
And I know an atom bomb that’s going for a song