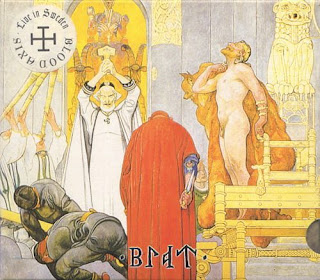 Emerging officially in 1989, Blood Axis is the result of much earlier foundations. Created and directed by Michael Moynihan, it has been and remains a sincere and uncompromising expression of his often controversial thoughts and instincts.
The first recordings by Blood Axis consisted of "Lord Of Ages" and "Electricity," two songs appearing on a German sampler CD. Thoroughly unique in their sound, the first of these tracks is a stirring orchestrated hymn to the ancient Persian sun deity Mithras, a god later adopted for a cult of subterranean worship by the legionnaires of the imperial Roman army. Although appearing on a relatively obscure release, these two initial efforts resulted in extensive radio airplay, dance club rotation, as well as mail from hundreds of enthusiastic listeners living as far away as Scandinavia, Malta, Eastern Europe and Thailand. Blood Axis had made its mark.
The band again inspired a rapturous response with the contribution of a pair of further songs to the acclaimed collection Im Blutfeuer,demonstrating more highly involved recording techniques and the ability to hypnotize listeners with subtle yet forceful atmospherics. "The Storm Before the Calm," the second of the two tracks on this CD, utilized winding piano loops, lilting choirs and the eerie sounds of early nature recordings (a thunderstorm from 1935) along with earnest vocals and historical samples to create a sound that is more than the sum of it parts, possessing an ineffable power.
In the last days of 1995, more than six years since its formation, Blood Axis unveiled the first full-length CD, The Gospel of Inhumanity. This long-awaited album has more than fulfilled all expectations, demonstrating that Blood Axis is proudly distinct from any other modern musical groups in both sound and presentation. Sealed within a stunningly aesthetic digipak, The Gospel... is a shape-shifting soundtrack which reveals more and more depth with repeated listening. Spanning from neo-classical reveries to guitardriven aggression, the sonic incisions of Blood Axis provide a haunting backdrop for vocal elucidations from Ezra Pound, Charles Manson, as well as Moynihan's own demanding voice. The Gospel of Inhumanity falls into no easy category, requiring a highly attuned level of intelligence and a mind free of pre-conception to appreciate its vast scope.
The Gospel of Inhumanity sold out two pressings for its initial release on German cult label Cthulhu Records, ensuring a fanatical following from Russia to Ireland, Norway to Portugal and everywhere in between. With virtually no promotion to speak of, the CD received rave reviews in Europe and America, and was even voted one of the 10 best albums of 1996 by UK extreme music glossy Terrorizer. Now powerfully remastered and re-issued on Misanthropy, the Gospel is destined to be heard by an even wider audience.
In November of 1997, Blood Axis played its first proper live show in Sweden at a special 10 year anniversary celebration for the legendary death industrial music label Cold Meat Industry. This special concert was attended by fans who came from as far away as Germany, Belgium, Austria and Latvia, and drew a rabidly enthusiastic reception from the crowd. In 1998, following the release of the planned second album, Ultimacy, the band will embark on a European tour. But until then, The Gospel of Inhumanity will continue seeping its way into the subconscious of the worldwide underground.
Blood Axis answers to nothing and no one but itself. It offers a frightening and honest expression of the souls of its creators, refusing to cater to either popular opinion or the approval of the music industry. At the same time Blood Axis continues to proudly shun popular trends and the mainstream, legions of listeners respond in growing numbers to a music presented with such undiluted care and willpower.
Album "Blót: Sacrifice In Sweden"(Fantastic recording quality for a live performance) is absolute MASTERPIECE of dark ambient / industrial. Magical atmosphere of this album wraps the mind with a green fog, psychedelic visions and depths of melancholy.A mix of Bach, Prokofiev, Pink Floyd, Coil, Laibach, Nietzche and Charles Manson!


The Hangman And The Papist

The mayor is giving dinner to the officers’ wives
His eldest son is learning how to fawn
The barrick block is hushed and tense
The soldiers drawing lots
Who will be the hangman in the dawn?

The lot falls on a young man
Who has served for but a year
His home is in the village close nearby
He shivers at the thought of what
He’s forced to do next day
He wonders who it is who has to die?

The day begins to break
A muffled drums begins to sound
A crowd begins to gather in the square
The presence of the hangman
In his terrifying mask
Weighs heavy on the minds of all those there
The colonel reads the sentence
Which the papist knows by heart:
He has failed to show alliegence to the king
His crime is thus with God himself
And in his name he must hang
The papist, head held high
Says not a thing

The jailer binds his hands
And puts his blindfold to his eyes
He leads him through the door before the crowd
The hangman sees his victim
And the blood drains from his face:
He sees his younger brother standing proud
The hangman tries to protest
But is ordered to proceed
His trembling hands begin to take the strain
His eyes are blind with streaming tears
And he cries for all to hear: