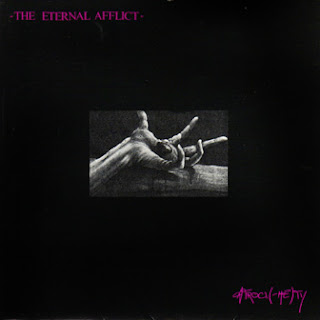 In 1990 The Eternal Afflict, Apocalyptic electro goth band began their comet like rise with Birth ... a place somewhere else and Sexual Decay. After the first studio takes in the legendary SSE Studios in 1991 with Winus Rilinger they produced their follow ups Visions, Door to my Pain, Daughters of Guyon and finally the first version of San Diego for their debut album Atroci(-me)ty. Ever since TEA were a fundamental part of the German alternative clubscene.
They went on their first headliner tour in 1992 with the EP Luminographic Agony and the hit songs Agony.
Overwhelmed by their enormous success they recorded their next album Trauma Rouge in 1993 and performed the probably most legendary electro tour of the early 90‘s. The Trauma over Europe – Tour broke all sales records for alternative bands as yet and rocketed them to the top of the European electro scene.
In 1994 their success was even topped with their follow up album War. Including songs like Childhood and the ballad Jonathan they conquered the alternative charts worldwide.
Reaching the climax of their carreer the members of The Eternal Afflict decided to dedicate themselves to solo-projects – bands like INSIDE, CYAN KILLS E. COLI and CYAN evolved, mingeling between accustomed and new electronic styles.

Watchin' the wheel as it
Turned down the hill, like you
Turned me down into my
Self-destiny, every kiss means
Pain, pain and secrets to me
Is it permanance that love
Shattered pride?

A man stands there lovely on
The fiels and a rabbit trapped
In the lime light like I walked
Straight into your zombie machine
The rain refreshed the air, like
My old tears reborn on my cheek
Is it permanance that love
Shattered pride?

My hands could touch the sky
A fence, a wall I couldn't walk
Through the door to your
Killing touch, it could be all
Catch in green grass + isolation