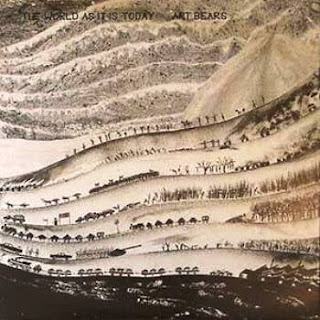 Art Bears were an English avant-garde rock group formed during the disassembly of Henry Cow in 1978 by three of its members, Chris Cutler (percussion, texts), Fred Frith (guitar, bass guitar, violin, keyboards) and Dagmar Krause (vocals). The group released three studio albums between 1978 and 1981, and toured Europe in 1979.Art Bears's music was often deeply political in content, reflecting the band's socialist leanings, and frequently experimental. Art Bears were more "song oriented" than Henry Cow, although much of the material that comprised their debut album release was actually written with the intention of being performed by the latter band.
Their music was very dark in concept and in atmosphere. BBC described it as: "Carefully wrought dissonances, angular folk tunes, sudden shifts in dynamics, dense layers of spectral drones, slabs of noise, topped off with Dagmar's strange, elastic Sprechstimme."Krause's voice contributed significantly to the mood and character of the songs. Cutler described her singing on the albums:"I don't write simple or obvious words, [...] they are not easy to sing. Dagmar had the amazing ability to make them make sense, to make them sound obvious. She sings from the inside and her accent helps to lift words out of their slots and give them a slightly resonant displacement. No one else could have done what Dagmar did on those LPs. I'm still amazed by her."
On The World As It Is Today and its predecessor, Winter Songs, the Art Bears move away from the long-form art rock of Henry Cow and get much, much more politically explicit: song titles like "The Song of the Dignity of Labour Under Capital" and "The Song of Investment Capital Overseas" almost sound like Monty Python gags today, but if any humor was intended it was clearly meant to be mordant. Frankly, the lyrics are so overwrought and portentous that it's hard to take them seriously. But the music is something else again. Cutler and Frith are natural collaborators; Cutler's drumming always rides a very fine line between the scattershot and the funky, while Frith bounces his horror-show guitar noise and carnival piano off of Cutler's grooves with manic abandon and fearsome inventiveness. And Krause's singing is just as inventive; she whoops, croons and screams her way through the density of Cutler's lyrics without a hesitation or misstep. Easy listening it isn't, but it's sure worth hearing.
"FREEDOM" is a loping beast of a track featuring lyrics by Cutler at his most biting, and a chorus of Dagmars that eventually give way to one of the best examples of rage on record. Her persistent shriek beginning midway through is a testament to both the band's commitment to its message, and Krause's physical endurance. The tune is almost a hard waltz, but the time never quite settles in, while Frith plucks away at some distant, sarcastic piano in the background. Song "Freedom" started like the dissonant and mutated piano waltz, which climaxes with Frith's angular King Crimson esque guitar feedback and Krause's utterly insane howling shrieks at times overpowering even the guitar feedback itself. Absolutely stunning. One of the the most sophisticated, beautiful and haunting songs to ever arise from the art of recorded sounds. Step back or be drenched in bile.

They just performed in Canada as part of the FIMAV festival- although without Krause. Did anyone hear how the show went?