28.Freddy K. and the Breeze - An Appeal to Heaven/Different Shade Of Love (Random Enforcement,1988) 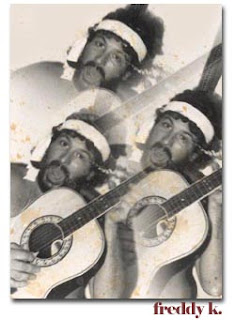 Freddy K. is a musician who has a unique perspective on different aspects of life, death and the eternal conflicts of spirit and man.He boldly touches on love, crime, drugs, prison, alcohol, homelessness, spiritual and physical warfare from a unique angle and first-hand experience.He hopes to promote a thoughtful, caring process to transpire within his listeners towards the true inner peace we all desire and need.For the past twelve years, Freddy K has been involved in the Christian Action Fellowship prison program witnessing to inmates through song and shared experience.Though all of the songs on album "Random Enforcement" were recorded prior to his sojourn in P-town the story the album tells aptly illustrates the portable quality of Freddy's universe. Arriving upon his shoulders, surveying the scene, and like all the great Rock-n-Roll albums of our time seamlessly transmuting itself into a more personal metaphor for the listener.There's an unmistakable sincerity in his lyrics, a lack of pretention that enables the music to walk the line between the insanity of a lonely individual and that of a world gone mad. Freddy channels the energy of a lost generation and with self-deprecating flippancy exorcises the demons which have left him and many like him feeling "ineligible for life". (The cover art is a double exposure of perpendicular images of a mace wielding Freddy juxtaposed with Linda Blair.This recording has the unusual quality of honesty of intent, and can be taken at face value or delved into deeply. But the overwhelming sense of Freddy's emotional state is neither sensational, nor affected. The title track muses with anti-establiushment overtones: "They've got a random Enforcement, Thank God they don't take us all away.I really don't think they've got a big enough cage." He alternately swings with ease between the realms of a Jimmy Buffet Party Animal (Sittin On The Corner, Old Hippies) to a tragic Syd Barret-esque Paranoic (Public Enemy #2)
-In" Appeal To Heaven", Freddy addresses the spirits he truly believed he was visited by while he slept who begged him to take his own life that he might represent them before God.He eases us down with the pulsatingand and remarkably touching sensitivity " Different Shade of Love"

How about osting the whole shabbang, that would be a real treat for sore ears!!