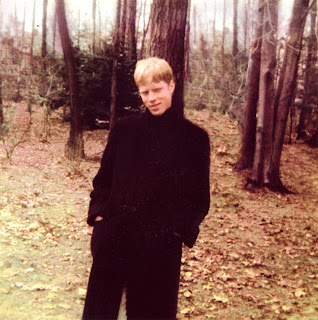 How to describe the music of Jandek? Like most amateur rock critics, start by comparing him to the Beatles. Then strip away melody, catchy hooks, rhythm, and harmony. Next toss out vocal and instrumental ability, along with any trace of human feeling other than dull, lingering pain. Aside from these deficiencies, he's exactly like the Fab Four.

Jandek, alone with a guitar and a microphone, sounds like a muttering sleepwalker aimlessly plucking amplified bicycle spokes. His music is dark and gloomy; but it won't make you sad-it will make you tense and uncomfortable. Here is the Ultimate Disconnect. You love it or hate it-and for every one of the former, there are one million of the latter. A sampling of his song titles: "Painted My Teeth," "Twelve Minutes Since February 32'nd" [sic], and "Janitor's Dead." Jandek accompanies himself on acoustic or electric guitar, but for the incoherence of his zombie-like strumming, his hands might as well be accidentally brushing against the strings. His occasional wheezing harmonica approximates early Dylan having an asthma attack. Sometimes Jandek is backed by a drummer who seems unfamiliar with the kit, and who pounds away relentlessly with no ground beat.
If the above seems too flattering a portrait of Jandek's cave-dweller primitivism, imagine a subterranean microphone wired down to a month-old tomb, capturing the sound of maggots nibbling on a decaying corpse and the agonized howls of a departed soul desperate to escape tortuous decomposition and eternal boredom. That's Burt Bacharach compared to Jandek.

Jandek is a recluse named Sterling R. Smith, and he's holed up somewhere near Houston, Texas. Since 1978 Smith has issued, mostly on 12" vinyl, 28 full-length albums-no 7" or 12" singles, no remixes, cassettes, or videos. A few of his cryptic album titles: Staring at the Cellophane, Telegraph Melts, Blue Corpse, Chair Beside a Window. He didn't begin issuing CDs until the early 1990s. His album covers are devoid of any information. He has never issued a press kit, and never performed in public. He rejects all requests for interviews. They found the Unabomber, but so far, no Jandek. Seth Tisue, curator of a Jandek website, notes, "His consistency in this regard far surpasses that of other legendary reclusives such as Thomas Pynchon and J.D. Salinger." Jandek's records rarely turn up in stores-even second-hand shops.

This article was adapted from 'Songs in the Key of Z: The Curious Universe of Outsider Music', to be published by A Cappella Books in Spring 2000.


I Give You Me

I don’t want to go to Las Vegas
I like better Carson City
I’m like a dog for you
I just wanna be with you
I got my casino all wrapped around me
I just acknowledged the presence
Of you eternally
I give you me
What more could you want here
I am and I will be here
When you need a friend
Or you’re ready to take my direction
I’m leading you here
Please take my bait
I want to eat you up and drink you down
I want you in me as I course through your body
I took your mind as I roamed about through you
I’m still here
It weren’t for a moment
You’ll never get away
You won’t want to
You’re mine
You don’t have a life
You live in me, I am you
I’m saved by that rainbow
Colors, grand scheme of things