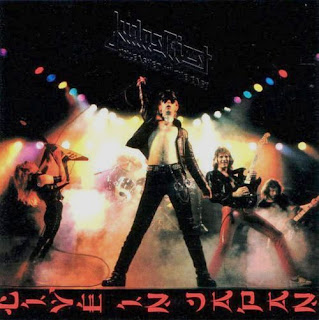 This is Judas Priest, the good old rock 'n' roll band from early 70's that dressed in suites and bell bottom pants, like youve never yet seen them or heard them before. This was Judas Priest's milestone.Easily the most influential and essential live metal album ever, this masterpiece was recorded on February 10th & February 15th , 1979 in front of a energetic Japanese audience. Judas Priest's Unleashed in the East is beyond classic, it goes right up there with the rest of the list marked "Greatest Live Albums" along with KISS' ALIVE! and Deep Purple's Made in Japan. The flash point from this set is the molten trio of "The Green Manalishi", "Diamonds & Rust" and "Victim Of Changes".Diamonds and Rust,Joan Baez cover (DESTROYS all other recordings of it) a great song of longin' and losin'out on love have the honest emotions more than ever before from great vocalist Rob Halford.

As I remember your eyes
Were bluer than robin's eggs
My poetry was lousy you said
Where are you calling from?
A booth in the midwest
Ten years ago
I bought you some cufflinks
You brought me something
We both know what memories can bring
They bring diamonds and rust