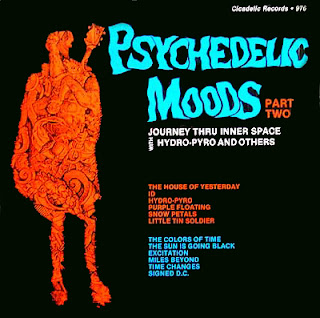 It’s true that that of the few people I know have heard this , the word ‘brilliant‘ is their comment .Operating out of Washington D.C. this band was formed in 1965 when Wally Cook and Ned Davis of the Young Rabbits teamed up with Jack Bryant and Charlie Jones. Their first album has a nice paisley cover and consists of competent rock with some pleasant psychedelic interludes. The second album carried on from where the first had ended. In 1998, The Fallen Angels returned with a new CD Rain Of Fire. Every Time I Fall In Love and Everything Would Be Fine are updated and accompanied by eleven new tunes (all bar one by Jack Bryant). Purists who expect a time-warp back to their garage and psych sounds of 1967/8 will be disappointed; but for those without such unrealistic preconceptions, this is accomplished and mature rock with blues, folk and country influences (just the odd spot of rust in the vocals department).Compilation coverage has included: Have You Ever Lost A Love? on Mindrocker, Vol. 10 (Dble LP) whilst their decent cover of Arthur Lee's Signed D.C. resurfaced on Psychedelic Moods - Part Two (LP & CD).This song being full of melodic guitar work, climbing keyboards and sensitive vocals.

Sometimes I feel so lonely
My comedown I'm scared to face
I've pierced my skin again, Lord
No one cares
For me


My soul belongs to the dealer
He keeps my mind as well
I play the part of the leecher
No one cares
For me, cares for me


Look out Joe, I'm fallin'
I can't unfold my arms
I've got one foot in the graveyard
No one cares
For me, cares for me