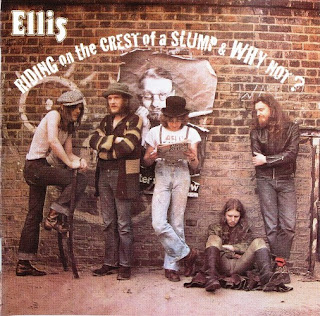 Steve Ellis was / is one of the UK's great vocalists. In the 60s, he scored several top ten hits with the Love Affair, and his soulful voice saw positive comparisons to those other great Brit vocal 'Steves' of the time - messrs Marriott and Winwood. Ellis were a combo that he put together with Zoot Money in the early 70s. Their first album - 'Riding On The Crest Of A Slump' -was produced by none other than The Who's Roger Daltrey, and it is a cracker. It features the brilliantly moody rock ballad 'El Doomo' - played a lot on Radio 1 at the time, and should've been a hit.This is one of my favourite tracks of all time, when I checked out " Riding on the Crest of a Slump" this track it blew me away! the sound of the twelve string guitar is fantastic, with roger chapman on backing vocals who could ask for more!

Hi,
the link is dead,can you re upload or inform the new link..
Thanks and regards,

"El Doomo"....many, many thanks !
the link worked perfectly well.
I simply love that "original" version. By the way, I was there (The Roundhouse" when Ellis were to be a suporting band for Steve Marriott's All Stars Band, back in the early seventies. Thanks again...