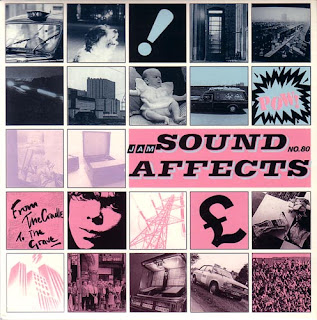 This is The Jam at their best.Sound Affects is The Jam's fifth studio album, released at a time (1980) when they were just about the biggest thing musically in the UK. From their early pop-rock musings through their 'evolution' as artists, they thieved from musicians better than they almost relentlessly.Sound Affects is the album pumping through your head, It's the album of a culture and scene that exists just as well outside of those parameters as it does within them. The different style of songs on this record make it sound incohesive, but it still works because most of songs are strong.The dry humour of “That’s Entertainment” blended selected urban imagery with an insistent acoustic strum to create one of the Jam’s signature tunes.This is a true classic, inverted escapism and a direct look in the eye!
That's Entertainment....One of the greatest songs of all time!

A police car and a screaming siren -
A pnuematic drill and ripped up concrete -
A baby waiting and stray dog howling -
The screech of brakes and lamplights blinking -
that's entertainment.

Waking up at 6 a.m. on a cool warm morning -
Opening the windows and breathing in petrol -
An amateur band rehearsing in a nearby yard -
Watching the tele and thinking about your holidays -

that's entertainment.
Waking up from bad dreams and smoking cigarettes -
Cuddling a warm girl and smelling stale perfume -
A hot summers' day and sticky black tarmac -
Feeding ducks in the park and wishing you were faraway -