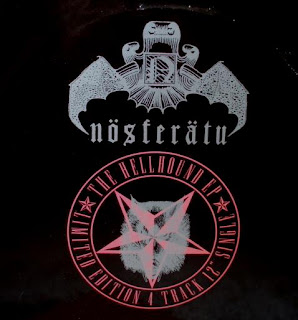 The British band Nosferatu formed in the late '80s by guitarist Damien DeVille, the group debuted on vinyl in 1990 on a compilation with a track called "Bloodlust." In 1991, they recorded an EP titled The Hellhound featuring vocalist Louis De Wray and bassist Vlad Janicek. At the end of 1992, Cleopatra sent the Sex Gang Children's Dave Roberts to try and sway the band to release a compilation of their singles on the label. Instead, they agreed to release Nosferatu's new album, 1993's full-length debut Rise, after which Niall Murphy replaced De Wray in time for their Halloween shows. 1994 saw the release of Legend, a collection of early recordings.On "The Hellhound" EP, the songwriting is perfect, and the vocals are hauntingly beautiful, best witnessed in the most emotional track "Crysania".