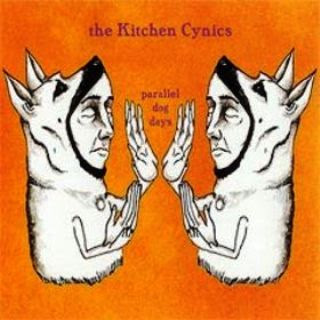 Now, who is Kitchen Cynics ? Many will agree he's a poetic genius. Musically every song becomes like a coloured miniature. All the guitar fingerpicking steps gently into the story's' tremblings. Surreal musical toy-like accompaniment finishes off the mood. Alan personally found some relative similar empathy with Pearls Before Swine's and Tom Rapp's kind of approach to music. But Alan's music is not from the 70's, but still, the acid folk gentleness of the gems, has survived. He is not afraid to use a rhythm box a few times, subtle and carefully enough mixed, a bit more to the back. The poetic approach is that much more inspiring to me, that each time when I hear a new couple of songs by him, no matter after how much time has elapsed, any writer's block dissolves, and I start to feel inspired to writing again. I consider the Kitchen Cynics as having created a psych folk genre on its own. It's all home-made, but well recorded. For new listeners this can work as the 'Alice in Wonderland' for the private life.Before this release came out I had a dream about a new KC release in the form of a small labyrinth cardboard-game with a tiny ball, with the plate full of pictures. There actually is another -card board- game with funny pictures in the inner side of the sleeve. I feel this similarity as another proof and aspect of how I feel the K.C. stimulate various connections with a parallel (dream-)world of experiences, which you can expect as a poetic picture, a funny shadow, all from another, perhaps cynic side of reality.