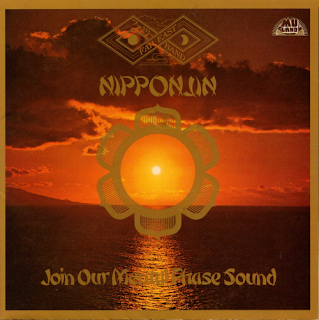 Regarded by many as the first Japanese progressive rock group, the Far East Family Band featured the keyboardist and future new age composer, Kitaro. A keyboard-dominated space rock band, the Far East Family Band played extended compositions that brought comparisons to Tangerine Dream and early Pink Floyd. The group's first album was released under the band name of Far Out. After changing their name, the band released The Cave Down to Earth in 1975. Their first European release, Nipponjin — Join Our Mental Phase Sound (1975), featured re-recorded versions of material from the previous record and the album attributed to Far Out.Klaus Schulze did produce the album, but did not play on it, and the album was recorded in Japan. The album starts off with the title track " Nipponjin", which sounds exactly like the original, but with added on synthesizers and Mellotron (and if you ever heard the Far Out original, you'll noticed how effective that song is without the synths and Mellotron). The music starts of with spacy electronic effects, synthesizers, and electric sitar. Mellotron is used as well, then the music kicks in to a wonderful ballad, with drug oriented lyrics. After a few minutes, the ballad is over, and kicks in to a wonderful guitar jam. After a couple minutes, the music slows down once again, with the electric sitar once again. Then the song ends with chanting in "Om", with some chanting in Japanese as well.Phantastic song for journeys through the mind-try and fly!!!

Not strictly a Moody Blues album, of course. But why not? There's Justin Hayward. There's John Lodge. There's Tony Clarke who produced most Moody Blues records. And the whole album sticks to the Moodies' formula, so in a certain sense this, not Octave, should be considered the true 'eighth' Moody Blues album.