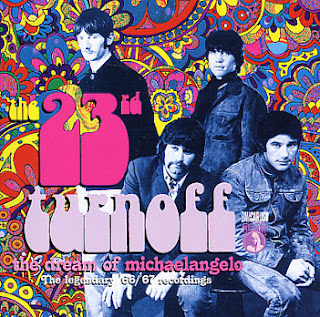 The 23rd Turnoff's name was an in-joke, referring to the exit off the M6 that led to Liverpool, from whence they came. Their history was a bit like that of the Tremeloes or, closer to home, the Beatles, in that their musical lineage went back to the end of the 1950s. With guitarist/composer Jimmy Campbell as their leader, they went through a long (and musically credible) stint as the Kirkbys, before evolving into the 23rd Turnoff, embracing flower-power and psychedelia in the process.

Their magnum opus was 1967's 'Michael Angelo', a gorgeous if somewhat downbeat single that should've fit right in with pieces like "Nights in White Satin," among other melancholic hits.Michelangelo is one of those jems hidden in that treasure chamber which we call Psychedelia. An absolutely brilliant arrangement to a great song.
It didn't make the charts, and eventually the group split up and Campbell teamed up with Billy Kinsley to form Rockin' Horse.