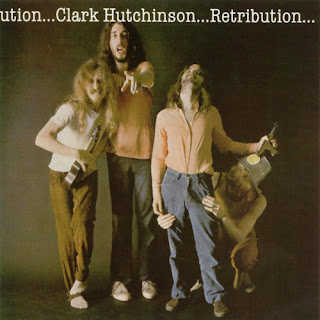 Clark Hutchinson made just three albums in their all-too brief career, the first of which, 'A=MH2', remains a classic of its genre. Recorded in two ten-hour sessions by the two musicians - Mick Hutchinson on guitars and Andy Clark on keyboards, vocals and drums - the record boils over with long, bluesy Eastern-tinged guitar romps which to my mind have never been equalled to this day. The follow-up, 'Retribution', was more straightforward blues-based rock but maintaining the lengthier excursions into druggy freakout territory on one or two numbers and the final album, 'Gestalt' (today, the rarest of the bunch).'Retribution', was an interesting mix 5-track album of softer lounge type jazz, harder guitar workouts, and more melodic tracks like great ballad "In Another Way".