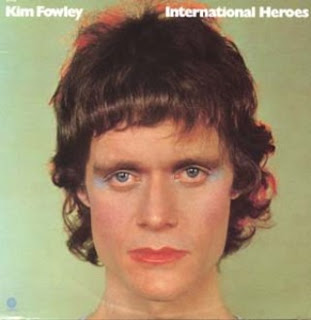 One of the most colorful characters in the annals of rock and roll, Kim Fowley was, over the course of his decades-long career, a true jack-of-all-trades; a singer, songwriter, producer and manager -- as well as a disc jockey and published poet.
International Heroes came out in 1973 and it's by far Kim's most normal (and competent) solo album. Some of this is probably owing to his collaborators (I'm especially curious about Kerry Scott, who co-wrote some of the best songs). Some of this is probably due to the fact that Kim mostly eschews his habit of singing in a funny/creepy/"rock-and-roll" voice, and just sings like himself (which basically sounds like someone trying to imitate Iggy Pop trying to imitate Bob Dylan, or vice versa).The second song on the record, E.S.P. Reader, actually manages to be pretty -- something that it's almost impossible to believe Kim to be capable of. One of the best ballads I`ve ever heard!!!