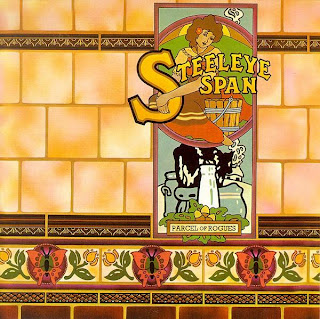 This is their best album from their "classic line up" era.All of the songs are traditional ballads and reels of ole England. There is some lovely harmony singing, and violin. For the most part, the strategic influx of power chords and electric guitars do compliment, rather than intrude.Parcel of Rogues is a good offering from Steeleye Span. Schizophrenic, maybe - they were trying to find the balance between the folk and the rock. That balance is found on their amazing "Come Ye O'er Frae France" - Maddy Prior possesses this song, it is powerful and lyrical, and connotes times of yore - yet those power chords at the half way mark will send you running for Freedom Fries.

Geordie, he's a man there is little doubt o't;
He's done a' he can, wha can do without it?
Down there came a blade linkin' like my lordie;
He wad drive a trade at the loom o' Geordie.

Though the claith were bad, blythly may we niffer;
Gin we get a wab, it makes little differ.
We hae tint our plaid, bannet, belt and swordie,
Ha's and mailins braid -- but we hae a Geordie!

Jocky's gane to France and Montgomery's lady;
There they'll learn to dance: Madam, are ye ready?
They'll be back belyve belted, brisk and lordly;
Brawly may they thrive to dance a jig wi' Geordie!

Hey for Sandy Don! Hey for Cockolorum!
Hey for Bobbing John and his Highland Quorum!
Mony a sword and lance swings at Highland hurdie;
How they'll skip and dance o'er the bum o' Geordie!

George I, being a protestant German king, was viewed with ridicule and hatred by the Jacobite rebels. This is a scurrilous attack upon him and his court.When George I imported his seraglio of impoverished gentlewomen from Germany, he provided the Jacobite songwriters with material for some of their most ribald verses. Madame Kilmansegge, Countess of Platen, is referred to exclusively as “The Sow” in the songs, while the King's favourite mistress, the lean and haggard Madame Schulemburg (afterwards named Duchess of Kendall) was given the name of “The Goose”. She is the “goosie” referred to in this song. The “blade” is the Count Koningsmark. “Bobbing John” refers to John, Earl of Mar, who was at the time recruiting Highlanders for the Hanoverian cause. “Geordie Whelps” is, of course, George I himself.