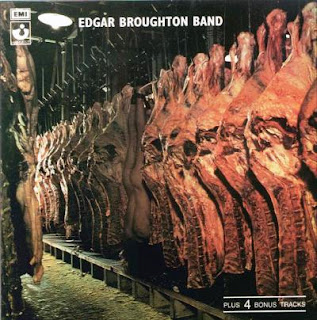 The anthemic 'Evening Over Rooftops' by the legendary Edgar Broughton Band, who have in their time been described as 'proto-punk', 'heavy rock', 'underground' and more recently (and most accurately!) as 'a bloody good rock band! In 1971, the band decided that existence as a power trio was limiting, and asked Victor Unitt, who had been playing meanwhile in The Pretty Things, to rejoin the band. In May, with the new lineup, they released possibly their finest work: their eponymous third album, which contained the classic "Evening Over Rooftops" (again with strings by David Bedford which Edgar Broughton called "stunning"). Edgar Broughton Band contained heavy blues and even country influences. Mike Oldfield also featured, on "Thinking Of You". This album has been said to mark the highest point in the Broughtons' career because of its sense of wholeness and completeness (while not straying into concept album territory).This is one of the truly great records of the period - beautiful, melodic, versatile, intelligent music. In retrospect, Edgar was one of the best and certainly one of the most underrated. The standout song is "Evening Over Rooftops" with what must be an awesome evocation of storming starlings - a bird now massively reduced in numbers. The imagery is as powerful as any created in rock lyrics.