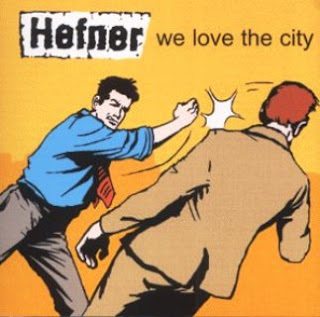 "The Greedy Ugly People" is a single by British indie rock band Hefner. Released in 2000 by Too Pure, it was the second single from their album We Love the City.Here they presented something resembling a charmingly awkward but almost disturbingly horny amalgam of Jonathan Richman, the Buzzcocks, Belle & Sebastian and the Violent Femmes.
The Greedy Ugly People might be my favourite Hefner song. Like most 'City' songs it's a love song. It just has such a simple lyric and sentiment but is done in an original way,A minimalist tune pores in and Darren Hayman begins to sing with a small plaintive voice so full of weeping intonations as if he's bewailing a fact that not all the women of this world have become his lovers yet or as if trying to break God's heart.

She had a conscience that surely did need pricking,
I was there for the picking as she would soon find out.

The Greedy Ugly People are not like us,
They don't feel the love that she and I would die without.

I had her on a chair in the middle of the living room,
And then we went to the bedroom, where we were making spoons.

When we went out she started clicking her heels,
She was sticking her chest out, cause she was starting to feel.