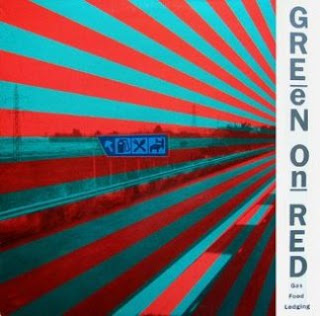 This album is a road album and its a drinking album. Reflections of a band whose existence is filled with playing rock in loser bars in a seemy mid-western USA. Stories from a band walking the knife's edge, good guys with the potential to snap apart at anytime. Searchers for the eternal whatsit, lost souls drifting through life desperately trying to cling onto some kind of truth and never finding it.

From Green on Red's early rantings which seemed drugged and mysterious, this album attempts to focus on the more essential questions that face thirty something year olds. I love the photo on the back cover showing Dan Stuart staring into the flames of a fire (fires being a direct link to the unconscious). That's the type of emotion he conveyed in his songs. Souls struggling against all the bullshit that life deals them yet never giving up hope and never stopping to dream about other possibilities. Much of side two is filled with images of death, loveless souls and lonesome drifters so it's obvious that Stuart was barely hanging in there, but the man is a survivor or so he'd like us to believe! The band never sounded better and the thinness of production on their earlier album has been sorted out. That countrified guitar twang and desert like drawl of Stuarts' vocals add up to a very convincing album that deserves alot more credit than it received at the time of its' release. This was the high point of their career and its' a real shame that Green on Reds' recorded output went into a terminal spiral after the release of this great record. One of the great lost albums of the decade!

Thanx very much for this