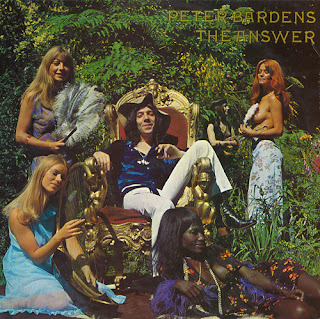 Peter Bardens, keyboards master,singer,composer and producer was a member of Them, early Fleetwood Mac, Shotgun Express in 1967, fronted by Rod Stewart, 1971 join the freshly founded Camel, 1994 he founded the band Mirage together with Caravan members .
His solo debut "The Answer" is a very fine album with rock music of the ending 60s. It's the sound of an era (orig. Bardens). Lots of organ, a fantastic guitar by Peter Green, flutes and tons of percussion.Some quite talented musicians were among the supporting cast, including Love Affair singer Steve Ellis, session vocalist Linda Lewis, Bruce Thomas (later to back Elvis Costello in the Attractions).
"All done in two long sessions. Vast ammounts of booze and other goodies consumed..." says Peter in the liner notes. Believe it! "Although this is something of a museum piece I think it still has its moments, so I hope y'all enjoy it for what it is, Vintage 69'."
"Don't Goof With a Spook " is one of the best blues songs ever (for me) !!!