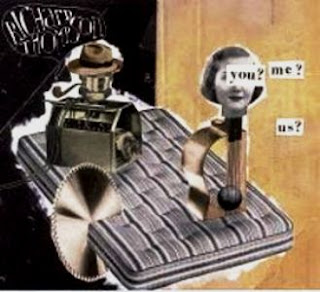 The troubadour is as revered for his brilliant songwriting as for his masterful guitar work. Thompson, 52, got his start in the late 1960s with the innovative folk act Fairport Convention, and later won acclaim performing with his ex-wife Linda Thompson. He's been earning raves for years with superb solo works.
What makes Thompson want to go into the creepy crevices of the human condition?"I like to get just below the surface, just beneath what people talk about," says Thompson, "those slightly unexpressed things."A song such as Cold Kisses, which opens with a man rummaging through his absent lover's personal belongings, is a prime example.When you agree to attend a Richard Thompson performance you’re setting yourself up for a rollercoaster ride of raw talent, emotion and awe. You know it’s coming but no matter what you do you’re still surprised when the moment of clarity hits you like a ton of bricks: You don’t know how he does it but Mr. Thompson can capture your attention like no other, weaving his often heart-wrenching lyrics with a searing performance on guitar.
Almost no one can sing songs of angst and heartache like Richard Thompson, it’s as though he has a special pair of glasses that can see inside your soul. He somehow is able to put emotions into words and sing about things and you didn’t even realize you felt.
Don't let his dark lyrics deceive you; this ''late developer'' can be light-hearted and playful.


Here I am in your room going through your stuff
Said you'd be gone five minutes, that's time enough
Here in your drawer there's lacy things
Old credit cards and beads and bangles and rings
Well I think I've found what I'm looking for
Hidden away at the back of the drawer
Here's the life that you led before

Old photographs of the life you led
Arm in arm with Mr X Y and Z
Old boyfriends big and small
Got to see how I measure up to them all
There is a place we all must start, love
Who were you holding in that fond embrace
I've found a door into your heart, love
And do you still feel the warmth of cold kisses

Here I am behind enemy lines
Looking for secrets, looking for signs
Old boyfriends big and small
Got to see how I measure up to them all
This one's handsome, not too bright
This one's clever with his hands alright
Tougher than me if it came to a fight
And this one's a poet, a bit of a wet
Bit of a gypsy, a bit of a threat
I wonder if she's got over him yet