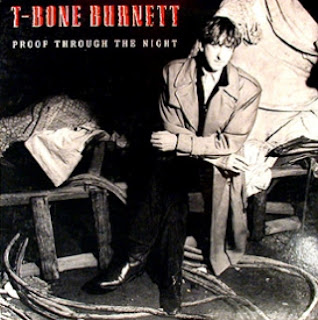 T-Bone is one of America's musical geniuses; had he stopped after producing Los Lobos, The BoDeans and Elvis Costello's best works in the 80's, he'd rate Hall Of Fame nominations. But he is also a world class songwriter, combining sly wit and roots music (long before it had a name) over some 30 years of recording.T Bone Burnett has carved out a space in that pantheon of artists making their most vital and compelling works in the light of wisdom, experience, and seasoned perfection of craft. Astounding writer, master of production and studio technique with paragon of creativity, truthful urbane wit and literary sophistication.
Proof Through the Night is smart, tight, insightful record.Guests include Pete Townsend, Mick Ronson, Richard Thompson, the Williams Brothers, and Ry Cooder. After All These Years is a simple heartfelt classic. He perfectly combine deep emotions with tuneful songwriting, and brilliant lyrics.This song made me cry uncontrolably.


After All These Years

I heard you saw her again last evening
I heard you'd been with her for two or three days
I still have her picture taped to my mirror
Does she still look the same after all these years?

I remember her as the most beautiful woman
Was her hair still blonde were her eyes still blue?
Were they soft and gentle or filled with tears?
Does she still look as hurt after all these years?

I lost track of her way back in the Sixties
I even heard that she had tried suicide
There were rumors the government killed her career
Did she still look as scared after all these years?

Will they ever uncover her terrible secret?
And untangle the mystery of her life?
Will they ever know why she disappeared?
Was she still as gone after all these years?