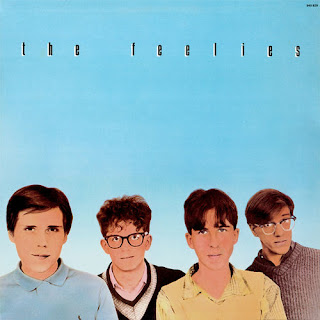 The Feelies were a rock band from Haledon, New Jersey. They formed in 1976 and disbanded in 1992. They frequently played at Maxwell’s, a live music venue and bar restaurant in Hoboken in the 1980s. Their first album, Crazy Rhythms (Stiff Records, 1980) was cited by R.E.M. as a major influence. The Feelies rarely worked with outside producers and created shimmering soundscapes with multiple guitar layers that sounded unique compared to the punk/new wave atmosphere of the late 1970s and early 1980s. Their name is taken from Aldous Huxley’s novel Brave New World, in which “the feelies” are a medium of entertainment in theaters where all of one’s senses are involved, not merely vision."Paint It, Black" is a song recorded by The Rolling Stones in 1966. It reached number one in both the U.S. and the UK charts. It was released as a single and included on the U.S. version of the album Aftermath.the Feelies' treatment of the Stones classic is amazing,furious guitar jangle and atonal vocals tag-teaming against a rhythm section in championship form.