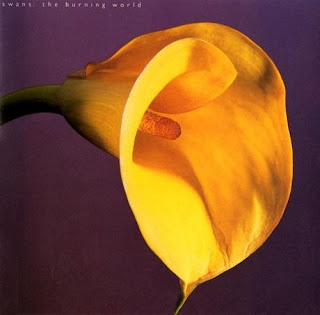 Children of God that album showed a gentle, melodic (yet still very dark and depressing) side to the band that had only been hinted at very rarely on previous records. This record only continues further in that direction.This is the only album Swans had ever recorded for a major label and Gira came away from the experience a very, very bitter man. The production duties were in the hands of a certain Bill Laswell, who many believe were responsible for this record's over-produced, major label feel. But everyone seems to be forgetting one thing here: the songs. These songs are absolutely wonderful. Extremely melodic, dark, emotional, beautiful and very, very, catchy. Gira's singing has improved significantly, and his voice has taken on a sultry Nick Cave quality to it. It's very, very hard to believe that this is the same man who provided the yells and screams on such brutal, punishing albums as Cop and Filth."God Damn The Sun" is one of the highlights not just of this album, but of the middle period in general, sad, dark and intensely poetic, with Giras' brooding deep-throat vocals, bleak and desolate imagery and showcase the beautiful, evocative lyrics.


When, When We Were Young
We Had No History
So Nothing To Lose
Meant We Could Choose
Choose What We Wanted Then
Without Any Fear
Or Thought Of Revenge
But Then You Grew Old
And I Lost My Ambition
So I Gained An Addiction
To Drink And Depression
(They Are Mine
My Only True Friends
And I'll Keep Them With Me
Until The Very End)
I'd Choose Not To Remember
But I Miss Your Arrogance
And I Need Your Intelligence
And Your Hate For Authority
But Now You're Gone
I Read It Today
They Found You In Spain
Face Down In The Street
With A Bottle In Your Hand
And A Wild Smile On Your Face
And A Knife In Your Back
You Died In A Foreign Land
And They Found My Letter
Rolled Up In Your Pocket
Where I Said I'd Kill Myself
If She Left Me Again
So Now She's Gone
And You're Both In My Mind
I've Got One Thing To Say
Before I Am Drunk Again:
God Damn The Sun
God Damn The Sun
God Damn Anyone
That Says A Kind Word
God Damn The Sun
God Damn The Sun
God Damn The Light It Shines
And This World It Shows
God Damn The Sun

Preach on brother. This is one of my very favorite songs, and I don't say that lightly or because I find it "cool" to be dark and depressed. I found this song when I was in that state already, and it resonated with me and there are echoes of that within me still today, though I am a happier (if not entirely happy) person. Thank God for people like Gira - that sounds cruel because I wouldn't wish his experiences or sensory imagination on anyway, but at least he shares it and in that way maybe there is a measure of catharsis no only for all us lost souls out there, but for him as well. Good post about one of my favorite bands, thanks.